No, I haven't suddenly become a Boney M fan, but this inane tune has been playing in my head for the past day or two as I start a two-week break back in Joburg.  (Maybe it's all that pollution that's messing with my cerebral jukebox at the moment?)

And while it's good to have a bit of a break from what has been quite a hectic first semester at seminary, I'm sitting at my "old" desk in my "old" office in the back of my "old" house - and yet, somehow, it doesn't feel like "home".  My wife and I are, in fact, speaking of our flat at the seminary in Pietermaritzburg as "home", and the house that I still own in Johannesburg as being "Mom's place". 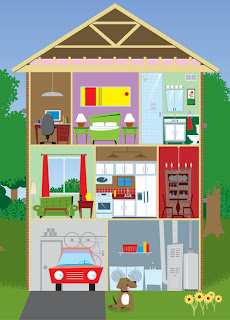 Which reminds me of a conversation that I had with Dr Simon Gqubule shortly before I left Uitenhage at the end of 2009, in which he asked of me where the place is that I call "home".  At the time I had to think about his question since, in Xhosa culture, the place of one's birth is what one considers to be one's home.  So for me, that would be a little hamlet called Royal Leamington Spa, which is situated on the outskirts of Birmingham in England (one needs to be specific for the benefit of this blog's American readers, since there is a Birmingham in Alabama as well).  Then again, at that time it could have been Joburg as well, since that was where my family was (I was alone in Uitenhage at the time).

But I've now come to realise that - for me, at least - home is where one's nearest and dearest are.  Seeing as I now have Belinda and James living with me at the seminary, I gues that (for now, at least), SMMS has become "home".

This makes me onder how one copes with the frequent moves in ministry - if each place is going to be seen as "home", it's going to make leaving a place that much harder.  Then again, the fact that "home" is wherever my wife and son happen to be may make it easier.  Anyway, that's another topic for another day - right now, it's really good to be able to do what I want to do without being at the beck and call of a seminary timetable, or at the mercy of examinations.
Posted by Steven Jones at 6/19/2010 09:26:00 am