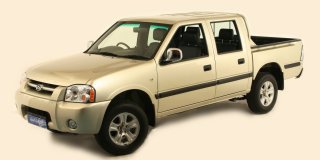 On a lighter side, this post came to mind as I ponder whether my double-cab bakkie will be ready for collection from the panelbeaters today.  I had to return it for some minor adjustments arising from repairs occasioned by an unfortunate coming-together with another vehicle just over a month ago.

When I bought this vehicle in 2007, I came in for some stick because I had gone for one of the Chinese bakkes from GWM.  My reasoning at the time was that an all-in price of just under R150,000 (which included leather seats, a major upgrade to the sound system, rubberising, a towbar, and a canopy), and seeing as the mechanicals were based on a Toyota engine with Bosch fuel injection (even if it does look like a "pavement special" between a Nissan Hardbody and the old Isuzu KB), I couldn't go too far wrong.

And so it has proved, with 40,000 trouble-free kilometres under the belt (apart from last month's ding).  I'll grant that the Toyota Hilux is a better vehicle, but whether it is nearly R180,000 better is a moot point.

However, owning this vehicle has not been without its moments.  When I was considering the purchase of a more rugged vehicle than the Renault Scenic I owned at the time (which was a great vehicle, but the service from Renault dealers was diabolical) in view of entering the ministry and the possibility of being stationed in a rural area, I did some online research first.

Unfortunately, since the GWM brand was fairly new in South Africa at the time, when you did a Google search on GWM you ended up with a whole lot of unwanted propositions that could result in instant dismissal from many institutions, including the Methodist Church.  You see, GWM also stands for Gay White Male, which meant that my computer screen was filled with classified ads from homosexual men looking for meaningful overnight relationships.

Three years on, however, I have come to terms with my same-sex relationship with this particular GWM.  He's not the prettiest truck around, and the ride is like a bouncing ball compared to my wife's sofa-comfortable Camry.  But then the Camry can't lug a ton of bricks / floor tiles / furniture / holiday luggage.  The GWM has relocated me twice since entering the ministry, with no problems other than a burst tyre just outside Grahamstown.  He's reliable, dependable, and does what he's designed to do - and so I love him!
Posted by Steven Jones at 10/13/2010 07:15:00 am

That's a great truck. I wouldn't call it a gay truck. Just put some mods with OEM Toyota parts and your good to go.