One of my passions is cars.  Before I was even out of nappies, I could tell the difference between the engine note of a V8 and a straight six, and as a child with a father who sold cars for a living, there was nothing cooler than spending Saturday mornings at work with him.  From the age of about seven, my job was to start up each and every car on the lot and give them a bit of a rev (so the battery wouldn't go flat, of course!).

Yet despite me being a petrolhead of note, my ownership experience of cars has been ... er ... boring?

My first car was a 1984 Ford Escort 1.3L (the first front-wheel-drive ones), which had (unbeknown to me) been rolled by its previous owner and so the roof had not been put back on quite straight.  It had a top speed of about 130km/h (down a mineshaft, with a tailwind), and 0-100 took about three weeks.  Still, I had some fond memories of that car - especially when I was washing it at my then-girlfriend's house and she brought me one her mother's pristine white towels to dry it with, so as to not scratch the paintwork.  (I figured there and then that she was a "keeper" and married her four years later).

Tiring of the 'phone messages to call the Escort agency every time I took it in for a service, I got this rush of blood to the head and decided to buy (and restore) my late father-in-law's old 1.6 Corolla - the last of the rear-wheel-drive models.  It had an asthmatic 50kW engine, leaked every kind of automotive fluid known to humankind, and had a gearshift that felt like a wooden spoon in suet pudding.  It's only redeeming feature was that i had put a reasonable sound system in (comprising "the" tape deck to have in those days - a Pioneer Arc Component, coupled to their famed GM120 amplifier).

Enter my first "real" job, and to go with it I bought my first "real" car - a 1991 BMW 325i (yes, the one that epitomised the "feline shriek" of a BMW straight six).  It was a seriously fun car to drive, with 126kW on tap (exactly double that of the Corolla), but after a holiday to Cape Town with wife, mother, 18-month-old son, and 3 tons of luggage and baby paraphernalia on board, I knew I needed a bigger car.

So what would any self-respecting, 30-year-old professional on his way up the corporate ladder, who had just spent two years of "sheer driving pleasure" in one of BMW's finest, buy next?  Not what you'd expect.  The honours for my first new car went to ... a boring grey Mazda 626, whose main feature was a boot that was probably big enough to park the BMW in, had I kept it...

Five years later and 151,000 trouble-free kilometres later, I made what was probably the stupidist automotive decision of my life, and traded the Mazda in on a Renault Scenic.  Great car, with it's high-up stance and millions of hidey-holes, but one couldn't complain about the service - 'cos there wasn't any.  Then came the calling to ministry, and with the prospect of being posted off to the boondocks, and glad for an excuse to get rid of that horrid French thing,  I threw all caution to the wind and bought the gay Chinese truck (see previous post here), for which I have developed a distinct fondness over the past three years.

In the meantime my wife also took to the road, with her first car being her late father's 1.3 CitiGolf.  I should have suspected that lightning would, in this case, strike twice in the same place given my experiences with his old RWD Toyota, and so it proved with the Golf being held together with prestik and wire.  When the VW finally expired, I decided that my significant other needed something more reliable, which came in the form of an Opel Astra Estate, which was quite zooty with its aftermarket mag wheels and "Bite Me" logo on the rear.

Unfortunately, after a mere 12 months with the Opel, Belinda had an altercation with an Oshkosh on the N12, in which the Astra came off second-best.  So now she drives a motorised sofa with a boot big enough to take another sofa in it, otherwise known as a Toyota Camry.  It's big, it's lazy, and it's an automatic - and it's probably THE most comfortable car I have ever driven. 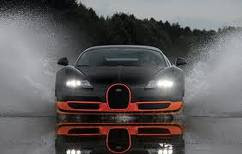 However, despite my wife and I owning what many would consider to be the most boring transport on four wheels during the 19 years of our marriage (except for the aforementioned BM), my son has, thanks to Messrs Clarkson, May, and Hammond of TopGear fame, become a petrolhead in the making.

This morning, in reference to the expressed desire of Jeremy Clarkson that, when he dies one day, he be driven to his funeral at 100 miles an hour in anything with a V8 under the bonnet, James decided that if he were to die anytime soon (God forbid), he wants to go one better - a Bugatti Veyron Super Sport, the most insanely powerful (and expensive) production car in the world.

There's just one problem - since the Veyron doesn't come in an estate version, and the exhaust configuration precludes the fitment of a towbar (which would be sacrilege), the only way to turn a Veyron into a hearse would be to put a roofrack on it.