Anyone can make a baby - but it takes a REAL man to be a father! 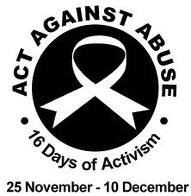 After reading this article written by Democratic Alliance leader Helen Zille (posted on the Moneyweb website here), I have but two questions:
My aim during this 16 Days of Activism for No Violence Against Women and Children is not to attempt to provide answers, but to post various articles that I've found to be of interest in order to stimulate debate.

Anyone can make a baby - but it takes a REAL man to be a father!
Helen Zille

The 25th of November saw the start of the annual "16 Days of Activism against Gender Violence", an international campaign started in 1991 by the Centre for Women's Global Leadership at Rutgers University in the United States.


The 16 days begin on November 25 (International Day against Violence against Women) and end on December 10 (International Human Rights Day). The linking of these two dates is to emphasise that violence against women is a violation of human rights. The campaign is observed, in various ways, in some 156 countries around the world.


In South Africa we have added an extra dimension - children's rights. We call this campaign the "16 days of activism for no violence against women and children". It is an essential addition in our context.


This point was driven home when I participated in the national launch of the campaign in Khayelitsha (a township on the outskirts of Cape Town) on 25 November. I visited a shack in Site B, Harare, where I met Pumla (not her real name). My interaction with this young woman will remain with me for the rest of my life.


In a small shack, about two by three metres, without any basic services, she was raising seven children. The youngest was still on her breast. Three others clung to her skirt. The daily struggle for survival was etched on her face. It was clear that she must have started having children as a teenager.


It was difficult to have a meaningful conversation with her, as (apart from the children) her tiny dwelling was crammed with officials involved in the launch. She was also slightly overwhelmed by the occasion. I failed to establish with certainty whether she was receiving grants for her children. It was also impossible to establish why the children of school-going age were not at school. She maintained the officials had told her to keep them at home for the launch, but they vehemently denied it.


I did manage to establish that her seven children have four different fathers, who live in Khayelitsha. They are all married to other women. And none contributes to the upkeep of any of Pumla's children. I also know that Pumla's story is by no means unique.


I have always been slightly sceptical of some of the statistics relating to child abuse, such as the reported estimate of the White Ribbon Campaign (an advocacy group against child abuse) that out of South Africa's 18.5 million children, about nine million have been abused. But if you include abandonment and neglect in the definition of abuse (as indeed we should), this statistic becomes horrifyingly real.


In the Western Cape, we have made it a priority of this year's "16-days" campaign to track down fathers who do not pay maintenance for their children. Every day, throughout the 16 days, we will publish the names of maintenance defaulters in the media, conducting door-to-door searches and road-blocks, and calling on communities to help us track down the thousands of men who make babies but refuse to accept the responsibility of being fathers.


A single mother with seven children in an unserviced shack demonstrates the campaign's relevance in a way nothing else can. Theirs is literally a daily battle to survive. Their prospects of lifting themselves out of poverty are hampered by the sheer size of the family, the absence of a stable father figure and the lack of maintenance money forthcoming from the various absentee fathers.


But the fathers of Pumla's children are not on our "defaulters" list. She has not sued them for child maintenance, so they have not officially "defaulted". Women in Pumla's position rarely know how to begin this process. And even if they do, the logistics are impossible. To begin with, where would she find the money for transport to a magistrate's court (repeatedly over many months) and who would look after her children while she was away? How would the "system" track down their fathers in the absence of any reliable addresses? And even if they were found, and summonsed to court, the entire process would be futile if they could show they did not earn an income and were unable to pay.


My fury against men who neglect their responsibilities overwhelmed me. I managed to ascertain the names of these fathers, and I resolved to track them down and make them take some responsibility for their children.


And then I began to have my doubts. What if my actions triggered unintended consequences for Pumla and her children? What if any of the men subjected her or the children to violence as a result? I resolved to learn more before taking action. I will go back and ascertain all the facts of her case. Only then will I decide on an appropriate course of action.


For someone in my position, the overriding question is this: what is the role of the state in addressing the needs of the millions of women and children in similar situations across South Africa? What does the "opportunity society" mean for Pumla's children? What can society realistically do to ensure that they have a better chance in life than their mother? How do we make sure the cycle doesn't repeat itself over and over again?


Every time I ask myself these questions, I start with the basic equation: there are just over 5 million registered personal taxpayers in South Africa, and about 13 million grant recipients. This ratio, which widens every year, is becoming unsustainable.


So, I go through the check-list of the basic minimum of state services: Does the mother have an identity document?  Do the children have birth certificates? Do they receive their grants? Is there a functional school nearby where they can get free education? Do they have access to free basic services: water, electricity, sanitation, refuse removal? Is there an accessible clinic? Are they getting the medication they need? Is it possible to ensure that the children complete their schooling without becoming teenage parents or drug addicts? If they manage to pass matric in their circumstances, will they be able to acquire the skills they need to find a job and improve their lives? Will our policies encourage the economy to grow at the pace needed to create these jobs?


We cannot turn back the clock for Pumla. But we must try to get a combination of services right to improve the life chances of her children. Even this is by no means certain. Simply getting basic service delivery right is often an insurmountable challenge.


But the sobering truth is this: even if the state is entirely efficient and effective (which it is not), it cannot succeed in transforming children's life chances unless parents fulfil their core responsibilities. Functional families are indeed the bedrock of successful developing societies. Basic services (even if efficiently delivered) have minimal impact in a context of substance abuse, truancy, unprotected sex, child abandonment - and the myriad matters over which individuals must exercise primary choice and personal responsibility.


As Dr Mamphela Ramphele succinctly put it: "It starts with parents taking charge of their children; teachers will build on a foundation laid by the parents; the rest of society can firm up the structure which will become the edifice of what we call a nation."


We have an enormously long way to go. But every day counts. That is why we will spend the "16 days" campaign getting the message across: if you are not there for your children, the least you can do is to pay what you owe.
Posted by Steven Jones at 11/28/2010 05:06:00 pm