Mvume Dandala to return to the MCSA 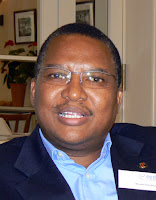 I've just seen an interesting article on the Mail & Guardian website announcing former COPE leader Mvume Dandala's proposed return to the Methodist Church of Southern Africa, from which he resigned as a minister when taking up his position in politics.

What saddens me, though, is the comments that appear below the article - commentators that are clearly ignorant of the relationship between the MCSA and its ministers.  The fact of the matter is that Rev Dandala was required to resign as a minister, since our Laws and Disciplines do not allow for its clergy to hold party political posts.  In fact, as ministers we are even discouraged from being members of political parties (although freedom to vote for the party of our choice is not impacted).

My own opinion is that this is a sound policy, for the simple reason that as a minister, we are called to serve all the members of the congregation, and I don't see how this can be done with integrity if one is a member of a particular party.  The risk of alienating those who align themselves to other parties is too great.  Incidently, Rev Dandala believes that there is no inherent conflict, and that ministers should be allowed to take up party membership and even political leadership positions.  His argument, expressed at a recent Ujamaa conference in Pietermaritzburg, is that Christians should be influencial in all spheres of life, including politics. I must respectfully differ with him on this one.  While I agree that Christians can (and should) serve God in all areas, when it comes to full-time ministry, I  believe that clergy must choose which hat to wear - politics, or ministry.

So now Rev Dandala has submitted an application to come back into the MCSA fold, having resigned from COPE's leadership and left active politics.  I have no problem with that - by all accounts, he left the MCSA on good terms, and in terms of our policies, a Pastoral Commission has been convened to consider his application for reinstatement.  Due process was followed when he joined COPE (i.e. he resigned), and it appears that due process is being followed concerning his return.

Although I don't know Rev Dandala personally, I do believe that he was called by God to ministry - certainly his track record as a minister and leader in the MCSA speaks for itself - and the fact that he has spent a season in the political arena does not mean that he has abandoned that call, particularly given his views expressed at the Ujamaa conference.  He had also done the honourable thing by resigning when it became clear that there could be no meeting of the minds between the different camps in COPE - and given the number of power-hungry megalomaniacs in South African politics today, honour and integrity is a rare character trait.

So I pray that the Pastoral Commission will be just that - pastoral - and that God's will be done, whatever the outcome.  And my prayers are with Rev Dandala, that he will not only seek God's will concerning his return to ministry, but that he will also find healing after what could only have been a trying time during his season in the political arena.
Posted by Steven Jones at 10/30/2010 01:06:00 am

Thanks for your great article - I know Mvume well and have had quite a lot of contact with him over the last few years since he has been in Cape Town whenever Parliament is in session. He has visited our offices a few times and been a great supporter of our prayer and ethics initiatives.

Mvume is a real asset to our faith and to the Methodist Church. I would rejoice to see him back in a Methodist congregation. We need great leaders in all spheres of life (politics and Church not excluded)m

Sorry for a second comment - I also wanted to affirm what you said about our ministers being cautious about holding party political office while in Pastoral ministry.

However, I do believe that being a politician can be an act of ministry - serving the will of God and the needs of the people for the sake of the Kingdom of God. It is full time ministry in the same way as running a Church, or being a Chaplain, would be 'full time' ministry.